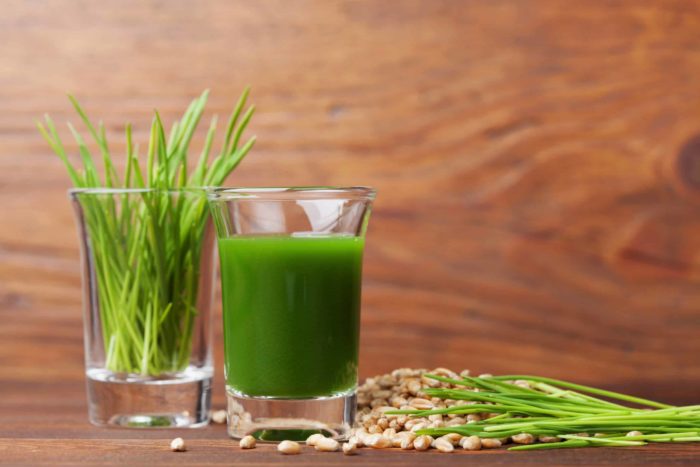 By now, adults have a pretty clear image of the foods that are healthy enough to be consumed every day and those that can lead to health problems when consumed on a regular basis. However, every once in a while, we discover that one type of food and go “I didn’t even know you could eat this”. For us, that recent discovery was wheatgrass, a mere plant that has too many health benefits to count and is actually super easy to procure.

Related: My Wheatgrass Juicer recommendations based on 29 years of juicing experience.

Coming from the Triticum aestivum plant, wheatgrass is a super healthy food that can bring a lot of benefits to whoever consumes it. While there are multiple ways to include it in your system, wheatgrass juice is the most common form of consumption. There are uncontestable wheatgrass health benefits, so here are just a few:

However, amongst all the health benefits that wheatgrass provides, it’s important that we also acknowledge the potential side effects and be prepared for them. First of all, make sure that you always buy wheatgrass from a trusted supplier or grow it at home, from organic seeds.

The plants need to be clean properly before being consumed, as they are no strangers to bacteria and mold. Start with small wheatgrass doses and increase them later on if you feel the need to. Your body may require some time to adjust to digesting it. Generally speaking, a liquid dose of wheatgrass is the equivalent of two shots.

People who consume powdered wheatgrass should limit their daily intake to one teaspoon. If you drink one cup of water after having consumed wheatgrass, you can lower the potential side effects, which include constipation, headache, upset stomach, fever, or nausea. It usually takes about two weeks for the body to adjust to wheatgrass, so that’s when the side effects are prone to disappear.

Hopefully, you are sold on the idea that wheatgrass is something that should be introduced to your diet because of the outstanding number of health benefits it provides. Even better, growing wheatgrass at home doesn’t take as much effort as one may think. Probably the only complicated thing about it is actually finding organic wheatgrass seeds from a seller that you can trust. As much as possible, try to avoid buying wheatgrass seeds that have been treated with pesticides.

If you want to grow your own wheatgrass, you will need about two cups of seeds for a 16 x 16-inch tray. Before actually planting the seeds, use a strainer to rinse them and leave them in a larger bowl with three cups of filtered cold water. Cover the bowl in plastic wrap and leave it there for about 10 hours. When the 10 hours have passed, repeat the process: rinse the seeds, put them in a bowl with three cups of water, cover them, and leave them for 10 more hours.

You will have to repeat the process yet a third time, leading to a total of 30 hours during which the seeds have to soak up in water. This is part of the sprouting process and you can’t skip it.

When sprouted, you can transfer your seeds to a pot, but make sure that it has several holes at the bottom. Place clean paper towels on the bottom of the pan, and make sure that you have organic compost/organic potting soil available for planting (you want to go as organic as possible in order to keep the wheatgrass at optimal health levels). Add about one inch of either of these two types of potting mediums.

Start from one end of the pot and start spreading a layer of seeds on top of the soil. Don’t leave too much room between the seeds, but don’t just throw them one on top of the other. Use your fingers to gently press the seeds into the soil (make sure they are not completely covered). Add some water to a sprayer and gently pulverize the fine mist to water the seeds.

Place something above the tray to cover it, but make sure that you use a material that still allows the seeds to breathe (a thin hand towel should do the trick). Place the tray in partial sunlight and remember to spray the seeds every day for about four days so that they can grow in damp soil. Once you notice sprouting, you can remove the protective cover, and continue to water daily and leave the tray in partial sunlight (direct sunlight kills the grass).

When wheatgrass is ready for cutting, you will notice that it splits at the edges, with a single strand becoming two. Your cutting timeframe is pretty short (usually between five and seven days) and you need to take advantage of it because the grass will soon turn brown. Harvesting can be done with a clean pair of scissors or a knife. You should cut right above the root.

Whatever you aren’t using right now, you can refrigerate for later use. However, to enjoy the full nutrients and benefits of fresh wheatgrass, it is always best to turn it into juice and drink it straight away.

Where to Buy Wheatgrass

Naturally, not everyone is a plant enthusiast up to a point where they would be willing to grow their own wheatgrass. Some like to purchase it and, thankfully, there are plenty of options for those who wish to do so. If you want to know where to buy wheatgrass, know that you have a variety of options available online, which means that you don’t even have to leave the comfort of your own home to get your hands on it.

There are plenty of online stores who sell organic or less organic wheatgrass in different forms (fresh, liquid, powdered, etc.). Take Amazon, for instance. Here, you can find a variety of sellers that provide wheatgrass. You can buy wheatgrass powder (organically grown, non-GMO, and labeled as USDA organic), wheatgrass tablets (for those who find drinking green juices difficult), and even wheatgrass drinks (like this one, which is a combination of ginger and wheatgrass extract).

Those fond of the idea of growing their own wheatgrass can find plenty of stores that sell No products found. or wheatgrass kits that include all the items needed to successfully grow this miracle plant at home.

Nothing beats a fresh wheatgrass shot in the morning, so it made sense that we include a juice recipe in our article. It takes only five minutes to make it, and the process is super simple:

You can also use wheatgrass as an ingredient in plenty of other creative recipes. For example, you can make a healthy guacamole dip to combine with nachos or crackers and successfully replace an unhealthy snack with a healthy one.

For this dip, you can mash two peeled avocados, then mix in the juice from half a lime, half a teaspoon of kosher salt, ¼ teaspoon of cayenne, half a jalapeno (seeded and minced), half a cup of salsa, and one teaspoon of wheatgrass.

Consuming one shot or glass of wheatgrass juice every day can go a long way in improving your overall health status. The tricky thing about wheatgrass is that you need to discover how your body reacts to it so that you can adjust the dosage accordingly. Some people experience an increase in energy, which means that drinking wheatgrass juice before bed might not be the best idea.

Some of the links in this post are affiliate links, if you click them and make a purchase I will earn a commission. I link to these products because of their quality and not because of the commission I receive.

Below are related posts you may enjoy

Juicer360 is a participant in the Amazon Services LLC Associates Program, an affiliate advertising program designed to provide a means for sites to earn advertising fees by advertising & linking to Amazon properties.